Sooo..... Yesterday was 8dpiui for me and until then I was feeling really good. In the afternoon I started having a very small amount of brownish CM. At first I thought this was a good thing. Possibly implantation bleeding?? The timing was perfect for that. So I went on my merry way throughout the day and had really good thoughts in my head about testing later this week. I had good conversation with my girlfriend jen that 6 months prego. She gave me her left over tests and we laughed about the whole iui experience.

Then I woke up this morning. I had more of what I call "spotting".  Needless to say I was freakin out. The nurse that I am made the judgement call that its more than just implantation bleeding. How could I be starting my period only 9 days after ovulation??? What the hell!?!? I was completely discouraged and told ryan what was going on. In the midst of telling him, my prego sister in law shows up at the house unexpectantly. I revert to my cave, aka my king size bed and bawl. How I fell back asleep considering I got like 8 hours of sleep is beyond me. I woke up and called my friend who is a doctor that I work with and also went through IF. She has been my go to girl through all this and has been so good to me with advice both medically and as a friend. I am just crazy about her! She said its nothing to worry about if its no more than a trickle. She actually thought is was a good thing. She girlfriend who spotted the first trimester and had a healthy baby. She did make me feel a lot better.

As the day has gone on I'm thinking its more a period rather than implantation bleeding.  I've been having menstral like cramps and generally irritated. My nips still hurt something misserable. I swear they're going to fall off!

So I'm very disheartened today and about the entire cycle. But I'm more concerned as to why I've started my period so early. I've never started a perion on my own. I've always needed provera to induce one. The whole thing is just weird. I'm gonna call my doctor in the morning and see what they have to say.

In the meantime, tomorrow is opening day of turkey season. Hopefully, I can lay a big bird down and relieve a litle stress. I also took a couple days of pto to enjoy the week. So we've been driving around on the 4wheeler on our friends farm along the missouri river and putting the turkeys to sleep.
C'mon missouri thunder chicken!!!! And cd1...... :(
*L* 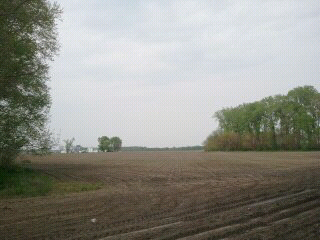 It's a Cyster Thing
My name is Leslie and I am 27 years old. I married my best friend Ryan in the summer of 07. Since then, a lot has changed. I got a new puppy, a new car and a new career. I graduated nursing school in May of 09 and currently working as an Intensive Care Nurse. I have 2 west highland terriers named Derby (5) and Dozer(3). They are my babies!! I love to bow hunt and spend time outdoors.